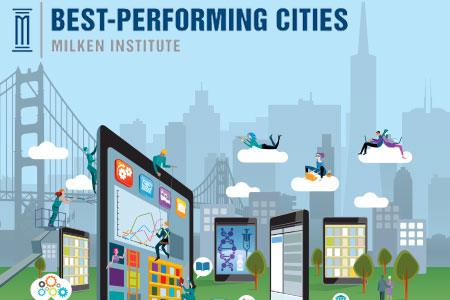 The Milken Institute just released their report on the Best Performing Cities of 2014. Their report focused on outputs such as jobs, wages, salaries, and technology rather than factors such as quality of life or cost of living.

Columbia was named #11 out of 179 small cities. Not a bad ranking by any stretch of the imagination—until you realize that we ranked #1 last year.  In 2013, the Milken Institute outlined a number of key factors that led to our top ranking including a large student population driving consumer sales, new multi-family housing projects boosting a sluggish construction industry, and the power of the University of Missouri to drive research as well as new business start ups.

What, though, are the reasons behind the slip to #11? A closer look at the data suggests a few possible reasons.

First, if you compare Columbia’s 2013 and 2014 scores (in constrast to rankings), we’ve actually held fairly steady in terms of job, wage and salary growth. Given that, it becomes less about our drop and more about other cities rise. In fact, Milken points out in their report that the cities showing some of the strongest growth are ones with a strong oil and shale industry—cities in Texas or North Dakota perform well. From my perspective though, not only is fracking not the direction we should be headed but our strengths lie with more university-generated enterprises. 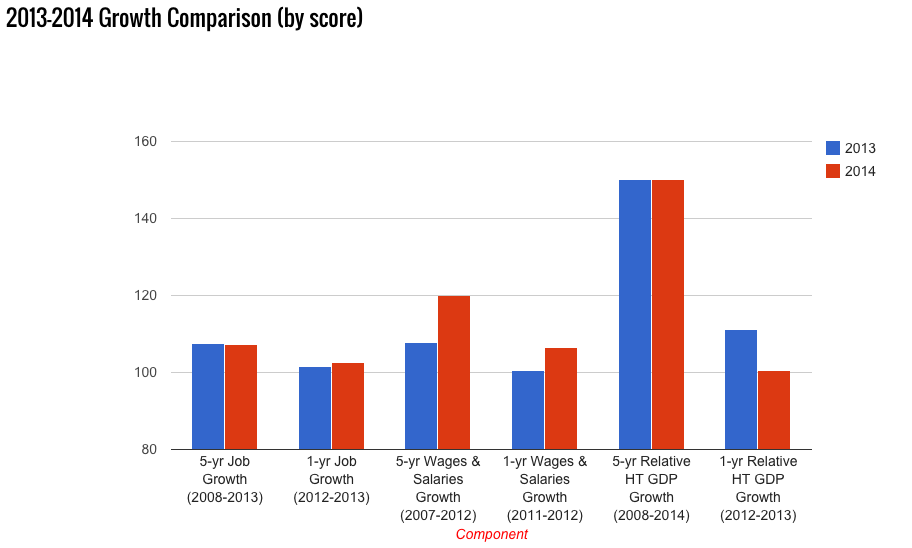 Second, we still rank strong on the 5-year numbers. We’re #9 overall in 5-year job growth and #2 in high-tech GDP growth. We may have slowed somewhat on our 1-year numbers but economic growth does tend to come in waves. City-wide efforts coalesce around a particular economic development project—attracting a new company, launching a major research start up, and so forth.  Once it’s complete, we start over again from scratch. Given that, we should look forward to what’s on the horizon for 2015.  We should also be a lot more concerned if wages and salaries were stagnant between 2013 and 2014.

Third, it’s likely that budget cuts on the state level—particularly to the University of Missouri and the Columbia Public Schools—had a chilling effect on growth and expansion. In fact, in their 2013 report Milken warned that tight state budgets may have a negative impact on Columbia’s future ranking. We’ve had difficulties explaining the value of investing in education to our state legislature, but it clearly leads to far more in economic growth in the long run.

Finally, 2014 was a tumultuous year for the City of Columbia. Highly vocal protests against multi-family housing construction, problems with aging sewer, stormwater, and electric infrastructure, and contentious debates on how to fund improvements were only a few of the issues we faced. In addition to all of these factors affecting economic growth, they also shifted the focus of city officials away from job attraction and retention. Whether this is seen as an important refocusing of city efforts or not, it will likely continue to impact us in 2015.

One key thing to keep in mind however is that cities are always being compared against others—by residents, businesses, and technology start ups. So even if our absolute scores remain steady for 2015, as long as other cities are improving rapidly, we will still fall behind.

← Restoring the Street Grid
The Changing Face of Manufacturing →