Arts Districts and the Power of Swerve

We walk through cities everyday but rarely do we ask how this messy mix of buildings, people and infrastructure came to be. Who planned this?

Planning used to be fairly straight forward. It came from a man with a vision. A planner would look at a public space, decide the best use for it, and then tell the public.We’re all familiar with the spaces created by these men of vision. Pierre L’Enfant and his Washington DC. Lucia Costa and his Brasilia. Walt Disney and Tomorrowland. 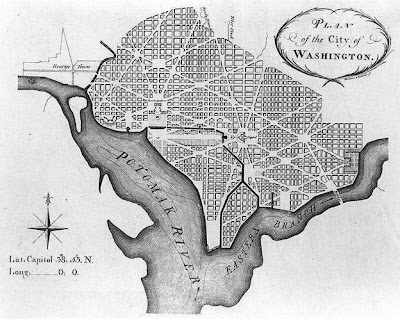 But the problem with public spaces is that the public insists on using them.

So for every famous man who plans a pedestrian mall lined with monuments celebrating democracy, you’ve got a much less famous man who decides that’s the perfect place to sell t-shirts. 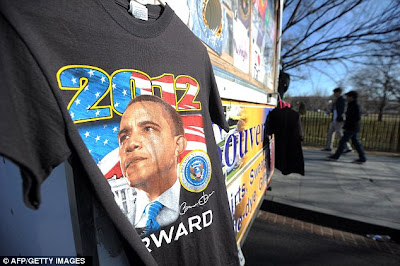 The problem is, cities are places where people live and people are constantly adapting, molding, and reinventing their surrounding to fit their needs, not the vision of the planner. And that’s exactly what makes a city interesting—the ways people use it. I would argue that any public space that isn’t being adapted by the public is, simply put, a poorly designed space.

Planners eventually got the message and the planning process shifted to incorporate the public. And in a nicely ironic twist, they gave this process a name no member of the public understands. They called it a charrette—which is apparently French for groups of people sitting around tables drawing on maps.

And that’s exactly how it works. The planner opens his doors to the public and they all sit in groups, drawing on maps and making lists of what they’d like to see. Ideally, the best ideas should rise to the top and the resulting space is one that will be used by the public because the public help create it.

I’ve participated in more of these than I can count and interestingly enough, regardless of the city, the area within the city, and the people involved, it’s pretty much the same list. People always want a farmers market, and usually a grocery store as well. Everyone wants to see artist studios, galleries, and public art. Loft apartments always make the list as does green space. Everyone wants a park.

So the planner takes all these ideas, puts them in a well organized plan with lovely sketches of the streetscape, complete with 40 year old trees and fashionable people sitting in sidewalk cafes, and then puts it all in a binder and proudly hands it over to the community—“here is your publicly-generated plan.” 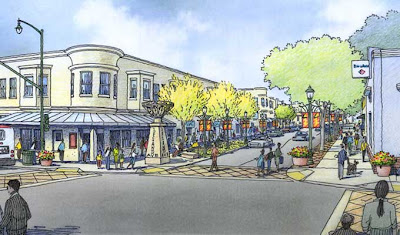 And the community says “thank you” and then puts it on a shelf and that’s where it usually stays.

There’s many reasons for this. Often these plans aren’t much more than a community’s wish list. Market forces are glossed over, supply and demand are ignored, and funding sources are non-existent.

Our time would have been better spent writing a letter to Santa.

This type of planning is well-intentioned but it misses the key point. This is not how great cities are made.

Cities are messy, they’re alive and most of the time, the planners are struggling to keep up with changes that are happening naturally all around them. Great cities happen from the bottom up. Think New York City versus Irvine, California. A random encounter on the sidewalk can have a greater effect on the structure of the city than a formalized plan.

Author Steven Johnson describes these random encounters as “the swerve.”

How does this work? People travel through the city in set routes. There’s a well worn path between my office the nearest coffee shop. But if you see something interesting just off your route, you swerve. A new shop, a sidewalk café, an art installation. Pretty soon, traffic patterns change. That little bubble is incorporated into the larger whole.

Then the next guy comes along and decides he’d like to take advantage of all the new traffic. So he decides to open a business just outside this area—usually because that’s where the rents are low and vacancies are high. And people swerve again. And then the next person comes along and she decides to open up a restaurant and more people swerve. And over time, you’ve created a busy urban street where there wasn’t anything before.

Who plans this? According to Johnson, No one—and everyone. There is no leader. It’s nothing more than a series of small, independent decisions but together, they become a whole.

You may as well ask, “who planned the web?” Google may offer us a directory but that’s like referring to the phone book as an urban planning document.

So given this, what’s the best way to plan? And if cities are created from the ground up, what’s the role of the planner? Part of it is adapting to what’s happening organically, on the street level.

The idea that some types of areas could emerge organically first took root with something called Naturally Occurring Retirement Communities or NORCs. It used to be that we’d create planned retirement communities with easy access to all the necessary health and social services. And then we’d pack up all the seniors and move them to this community. There’s a much easier way to do this though. Residential neighborhoods age at fairly consistent rates. A neighborhood is built and everyone moves in at the same time, they all have children at the same time, and they all retire at the same time—naturally creating a retirement community. A much better idea is to move the needed services into these neighborhood, leaving the people in place.

It’s the same thing with Naturally Occurring Arts Districts. These are areas that emerge organically from an existing base of community assets. They are formed naturally, by the swerve.

We’ve got one here in Columbia—the North Village Arts District. Seven or eight years ago, when my organization was doing some downtown planning, we drew a circle around one underused section of downtown—the North Village—and said “this is our arts district.”

It was utter hubris on our part. We had no plan, no funding, and no marketing campaign. But we had what we thought was a good foundation of existing assests. The area had historically been the bohemian counterpart to the rest of downtown—the Strollway where women shopped in hats and white gloves. Susan Taylor Glasgow, a nationally recognized glass artist, was doing some really interesting things with public art. And of course, there was Mojo’s so we had a steady stream of live music.  We started recruiting arts-friendly businesses to the area.

And then one day Mark Timberlake walked into my office and said, “I just bought an old roofing company over on Orr Street. What should I do with it?” I had been fielding calls for months from artists looking for affordable space so I didn’t hesitate. “Artist studios.”

To my surprise, he listened–and then he talked to people.  Artists. Contractors. He learned about adaptive reuse. And soon, we had Orr Street Studios. Artists leased space. They hung paintings on the walls. Hosted events. Turned the doors themselves into works of art. And soon, people started to swerve.

Enough that Mark bought the diaper factory next door and started to work on that. Then, John Ott bought some property in the area and started recruiting artists there as well. Lisa Bartlett opened Artlandish  Gallery and runs the Catacombs, a collection of artists in a warren of tunnels underneath her shop. More people began to swerve. 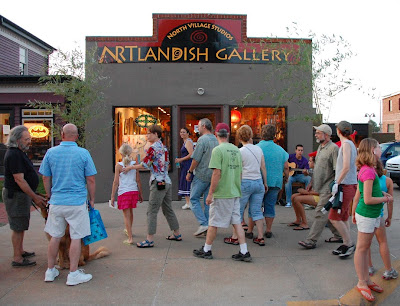 And then we worked with the city to improve infrastructure–undergrounding utility lines, installing street lights, adding crosswalks and bike racks, hanging banners.

It expanded to all sorts of creative types–dance companies, graphic designers, photographers, web developers. Mojo’s grew and Forest Rose Park was born. And one day, the Cafe Berlin packed their entire restaurant into a caravan of bikes and moved into the old gas station. More swerve. 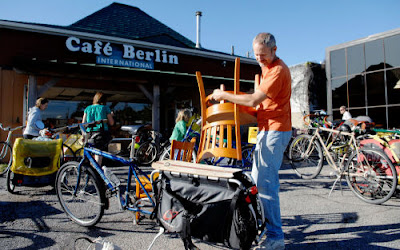 And then PS Gallery, a well-established gallery on Broadway, learned they had to relocate. The first question everyone asked was, “Are you moving to the North Village Arts District?” The answer was yes. Swerve.

So now you walk through the North Village Arts District and yes, we have both a Farmers Market and a grocery. We have artist studios and galleries and public art. We have a park. And we even have those loft apartments. nd not surprisingly, all the business owners and artists have joined together to create a more formalized organization to promote the area. 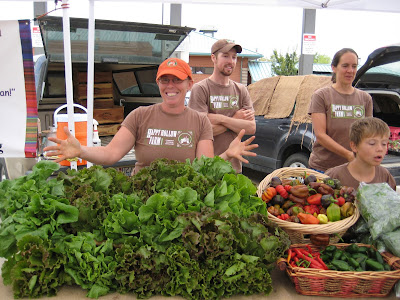 But not because a planner, sitting by himself, envisioned this neighborhood in exactly this way. It’s because the artists and the business owners and the property owners and all of us had small, individual ideas on how to take advantage of the swerve.

So we ask the question again. Who planned the North Village Arts District? The answer is no one. And everyone.