As my organization prepares to create a corridor plan, I’m spending much of my time surveying the street and benchmarking current conditions. At some point we’ll have to think about measuring traffic counts but I find the current technology a bit limiting. The old-fashioned approach involved throwing a sensor across the road to count cars. That’s a good start if all you’re interested in is volume but it tells you very little about where all those people are actually going.

The key to a successful corridor is connections. While it’s useful in some ways to have a thoroughfare that people travel down to get someplace else, what we really want is a street people go to rather than through. That’s where the idea of connections comes in. Where are people coming from? Where are they going? What routes do they take to enter and exit the corridor? What streets do people take instead of this one?

I’ve spoken to a few people about cameras installed on key intersections to collect some of this data and while it will help identify collectors and direction of  travel, it’s still a far from comprehensive understanding of travel patterns. That’s why the trend of wearables offers such potential. Can the quantified self help with city planning? If people are already tracking themselves via apps like Strava or MapMyRun, can we draw on this data for urban planning efforts?

For instance, below is the cycling heat map for Columbia. It’s immediately clear where all the trails are—they show up bright red. The corridor I’m looking at is the east-west running gray line just south of the interstate. And yes, gray means that no one bikes on it. Looking a little closer though shows that people are biking through the neighborhoods just south of the corridor. We can clearly see the routes running parallel to the corridor and can see the points of connection. For a planner, the question then becomes how to enhance those connections to make them safer, more visible, and more welcoming. By doing so, perhaps we can start encouraging more biking along the corridor itself. 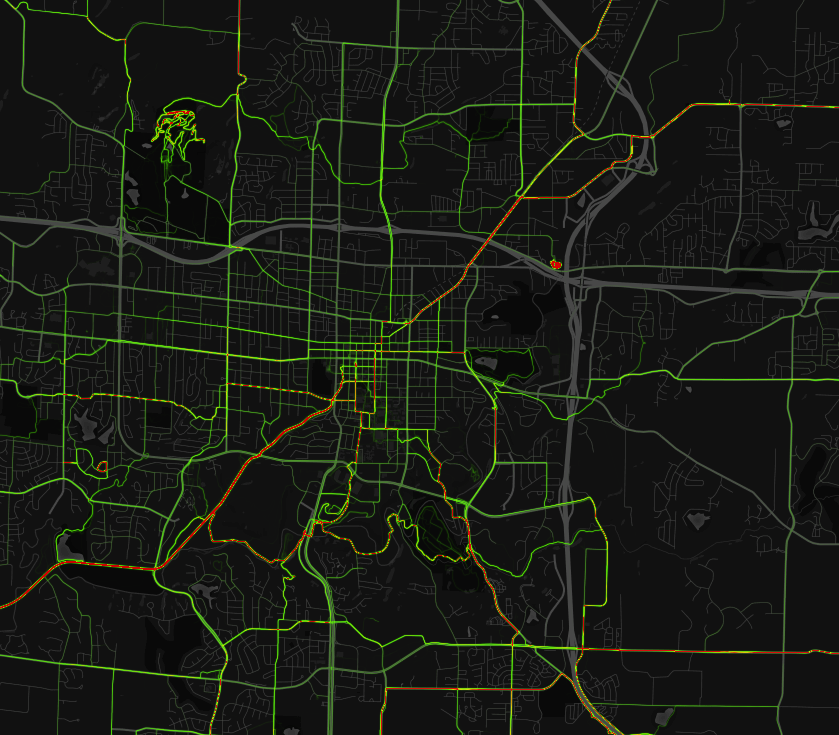 Strava also has a option to map runs but that doesn’t quite address the question of how pedestrians use a city or, importantly, how cars move around a city.

Human is another tracking app, but one that is designed to track all types of activities. They’ve also started tracking 30 cities across the world and providing time-based visualizations of movement in and around these cities. Here’s their maps of Los Angeles: 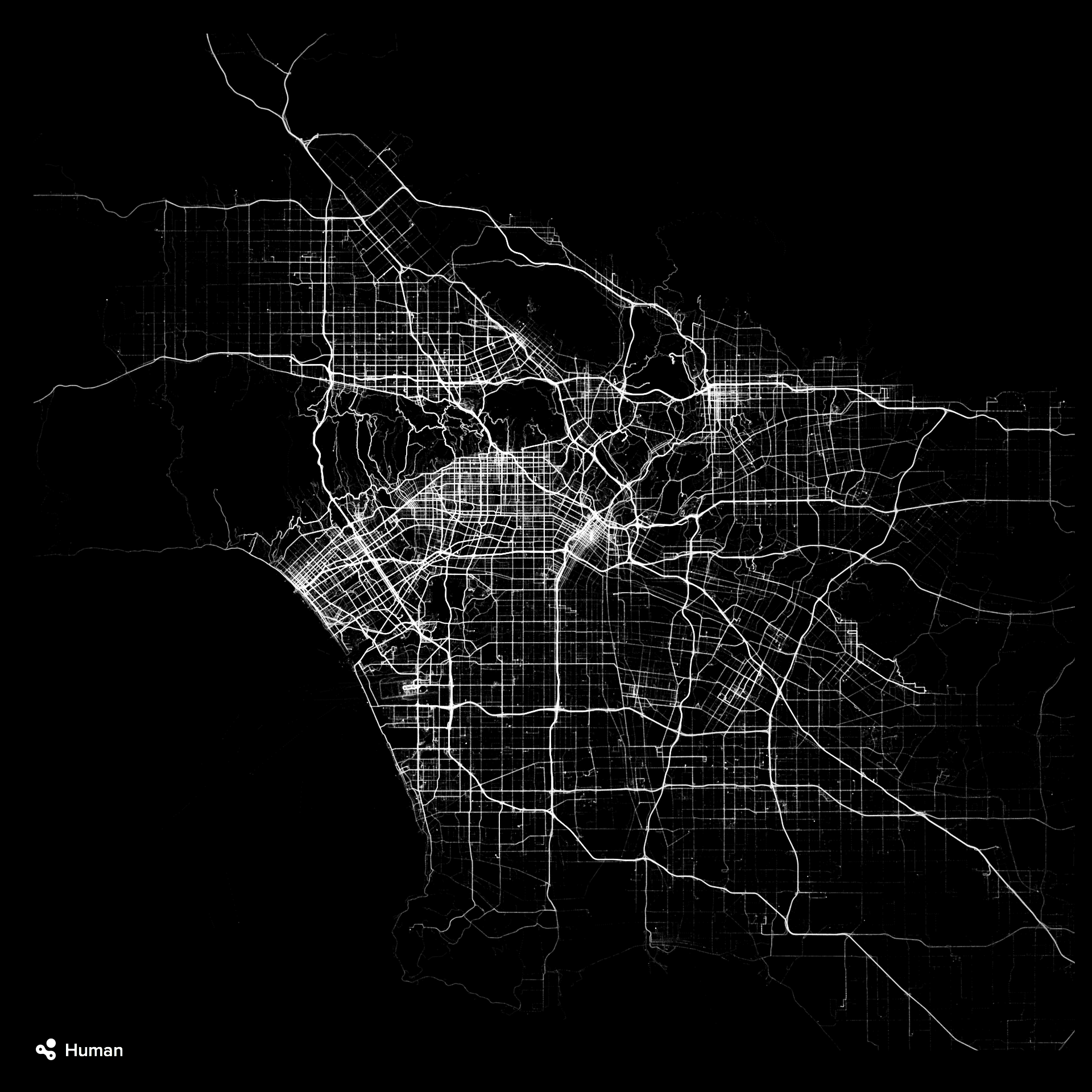 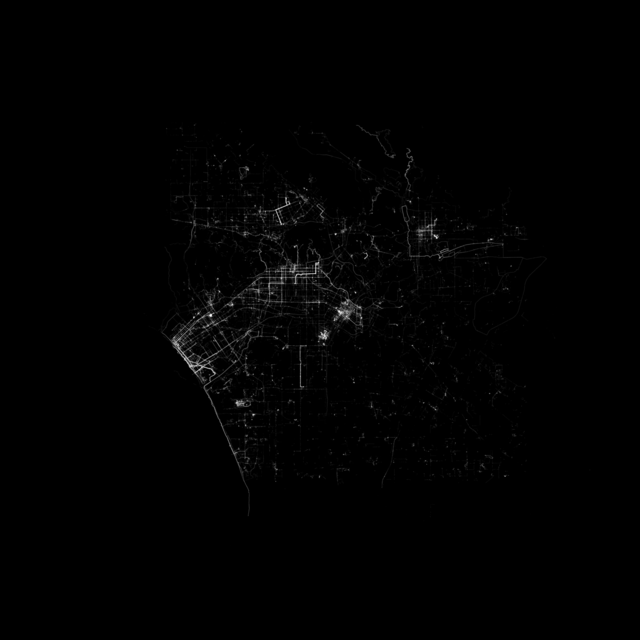 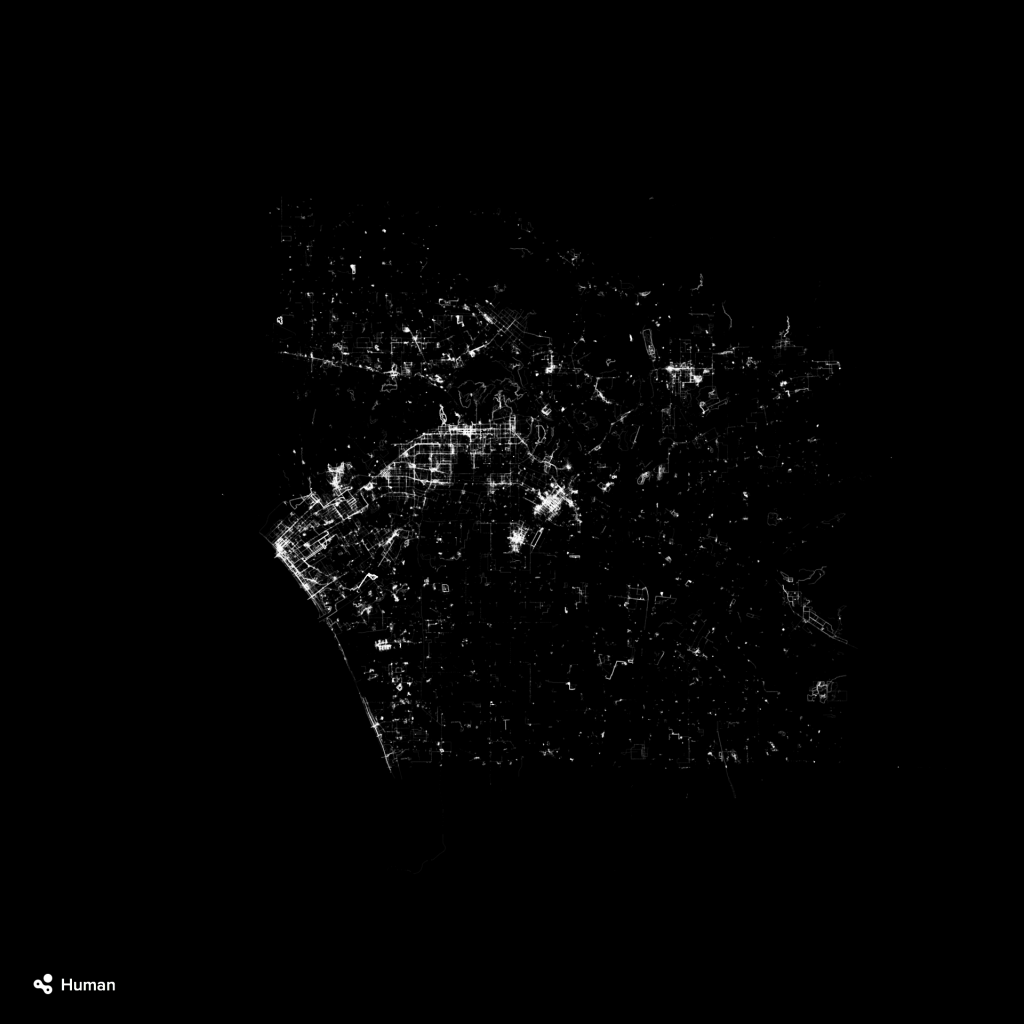 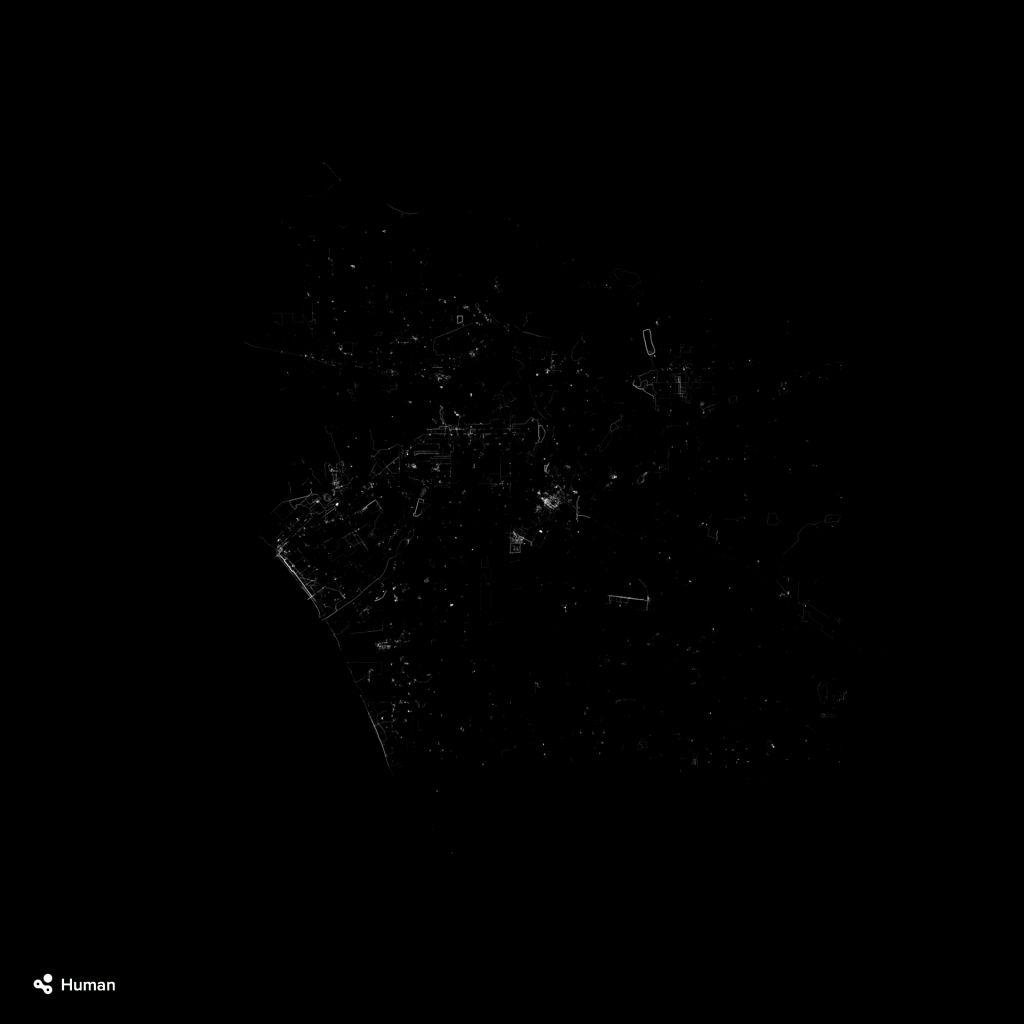 While motorized transit in Los Angeles is still clearly the preferred (or necessary) mode of travel, the maps do give us some interesting information. A surprising amount of people are biking, although largely along the coast and in the areas around Santa Monica, Beverly Hills, Van Nuys, and Pasadena. Certainly income plays into this but looking at the map of LA, these are also the areas with grid street layouts. Those areas also rank higher on walking, likely for the same reason. It’s much easy to bike or walk in areas with traditional street designs. Notice though that people seem to have found small walking and running routes all over the city. Even the motorized transportation data can be illuminating by showing the heavily trafficked freeways and the routes people choose to exit or enter. And imagine color-coordinated layers where we could see the vehicle/bike/pedestrian interaction points.

Of course, people using tracking apps on iPhones are not necessarily representative of the entire community. However, one thing we found when we were mapping out bike routes for Columbia was that regular cyclists had a much better understanding of the best bike routes in town—which streets you took to avoid hills, where the wider bike lanes were, what neighborhood short cuts would help you avoid the most traffic, and so on. Even the occasional cyclists without fancy GPS tracking apps would intuitively choose these routes because they were easier, safer, or more pleasant. In that sense, the hard-core enthusiasts served as trail blazers for those only out for a relaxing bike ride with the family.

Given that, these tracking apps can help planners learn the best routes for various modes of transportation and discover the areas most in need of infrastructure investment. And as far as my empty gray corridor is concerned, it comes as no surprise that the area is in need of infrastructure—and I now have a literal road map for determining the best places to start improving the corridor.