The Columbia City Council will soon be reviewing a new program designed to bring jobs into Columbia called the Enhanced Enterprise Zone program. Below are some commonly asked questions regarding the program. Work on this program is being done by the city’s economic development office, or REDI, and questions can also be directed to their offices at [email protected].

Currently, 118 other communities in Missouri have EEZs. That means that every time we try to bring a new company into Columbia, we’re competing against neighboring cities that can offer this state incentive as an added inducement.

Manufacturing is a clear choice. We can work to attract the next Quaker Oats and we can also help local manufacturers expand. We’ve got folks manufacturing everything from frozen pizza to microbrews to chocolate and we’d love to help them grow their companies.

Arts, entertainment and recreation could also be included. Theater and dance companies, hotels and conference centers, museums, and historic sites will all help spur the economy—especially in the downtown area—and will also help attract tourists to Columbia.


What do companies have to do to qualify?
Generally, a company has to make a significant financial investment (minimum $100,000 in a new or expanded facility), create 2 new jobs at a certain salary level, and pay for at least 50% of the employees’ health insurance costs.  A company that makes an investment in only personal property (ie, computers, technology upgrades, vehicles, etc.) would be eligible for just the state tax credits while a company making an investment in real property, such as building or expanding a facility, would also be eligible for a limited property tax abatement.

In addition, Columbia can decide to increase the percentage abated in order to encourage certain types of business practices. For instance, a company that builds and operates “green” could receive an increase in abatements and in return, the city would have less of a drain on its energy resources.


Which areas of the city will be eligible?
The goal is to bring companies into current priority areas such as Discovery Ridge, Route B, the Business Loop, and downtown.  These areas are already zoned for manufacturing or commercial and have sites that are available now.


How is the zone created?
Because the goal is to bring jobs into areas with high unemployment and low income, the zone is based on information collected on federal census blocks (from 2000; census blocks based on the 2010 census won’t be finalized until 2013).  The entire zone has to meet state guidelines for high unemployment and low income so it’s possible that some development areas are excluded because they bring the overall income of the zone over the state limit.

The zone also has to be contiguous. That means that in order to create a zone that includes all the city’s development priorities, a good portion of Columbia must be included. There’s just no easy way to draw a circle around just Route B, the Business Loop and Discovery Ridge—and also include downtown, which is right in the middle of the city.

Finally, federal census blocks don’t mirror local zoning designations or individual parcels; you have to include everything in the census blocks within the zone. So in order to include downtown, for instance, some adjacent residential must be included as well because they’re all in the same census block.


Does that mean someone could put a factory in my backyard?
An EEZ does nothing to change city zoning, the role of the Planning and Zoning Commission, or the City Council’s role in guiding how development happens in Columbia.

In order to construct a commercial building or manufacturing plant in a residential area, the developer would have to ignore the many shovel ready sites currently available in town, buy up a tract of homes, tear them down, battle the neighbors, convince City Council to change the zoning laws….well, you get the picture. The EEZ is designed to make the current industrial and commercial sites more attractive to new and expanding businesses.


What’s all this about blight?
Because so many state programs are designed to help out areas that are struggling in some way, a designation of “distress” or “blight” is common. The goal of an EEZ is to bring jobs into areas that have high unemployment and low income, thus the state requires this designation.

When someone says their junky neighbor’s property is “blighted’ because an old car is sitting on blocks in the driveway, that carries a very different meaning than when the state designates something as blighted. Again, the state is looking at employment, income, out-dated infrastructure and so forth. To put this in perspective, the Country Club Plaza in Kansas City was designated as blighted so they could receive incentives to build a new parking garage. 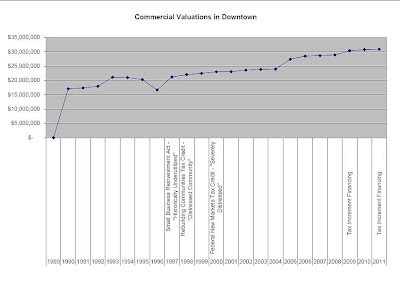 (Note: TIFs can have a designation of “blight” or “conservation.” A conservation area is not yet a blighted area but is detrimental to the public health, safety, morals, or welfare and may become a blighted area because of dilapidation; obsolescence; deterioration illegal use of individual structures; presence of structures below minimum code standards; abandonment; excessive vacancies;overcrowding of structures and community facilities; lack of ventilation, light or sanitary facilities; inadequate utilities; excessive land coverage; deleterious land use or layout; depreciation of physical maintenance; and lack of community planning.)

Does a blight designation affect my property values?
No, this has not proven to be the case. For instance, Rolla has had an EEZ since 1981 with no decrease in property values.

Over the years, large portions of Columbia—including downtown—have already been designated by the state as “historically underutilized,” “distressed,” “severely distressed,” and “blighted.” Despite this, investment in downtown has steadily increased and property values have risen. What we’ve found is that people looking to invest in an area react positively to the state incentive, not to whatever designation the state has placed on the area. The State Historic Tax Credit program is a great example of this. Developers were drawn to downtown to fix up old buildings because this incentive existed, leading to an increase in the value of everyone’s property.


Does an EEZ lead to eminent domain?
No. An EEZ and eminent domain are not connected. In fact, the city can condemn property right now for public use. An EEZ will make that neither more nor less likely.

What’s the process for approving the EEZ?
Preliminary work on the EEZ was done by a REDI subcommittee. The goal was to determine if an EEZ was indeed a feasible option for Columbia, develop a draft map of the zone to establish if Columbia was eligible, and make a recommendation to Council to move forward on the planning process.

The City Council has appointed a committee to finalize the list of targeted businesses and the map for the EEZ.  This committee is holding a series of public meetings on March 9 and March 16 at 10 a.m. in City Hall.  REDI will also host a public information session on the issue on Tuesday, March 6 at 5:00 p.m. in the Council Chambers of City Hall. The Downtown Community Improvement District Board will address the EEZ on March 13. The EEZ proposal is due to Council for final approval in April.