Getting Around in the Windy City

We recently spent a week in Chicago and it was a model of mass transit. We took Amtrak into Chicago and as we disembarked, immediately purchased a CTA pass. We could hop on either a train or a bus with the pass and both had smart phone apps that let us know everything from routes to connections to the time the trains would arrive. For shorter trips, we took advantage of Uber, another smart phone app that lets you hail a cab, track it’s route to you, and pay the driver after you arrive.

Riding high on the success of these systems, we decided to try out Chicago’s bike share, Divvy. Again, it has a great smart phone app that let’s you find the bike stations and see if there any bikes or spaces available. 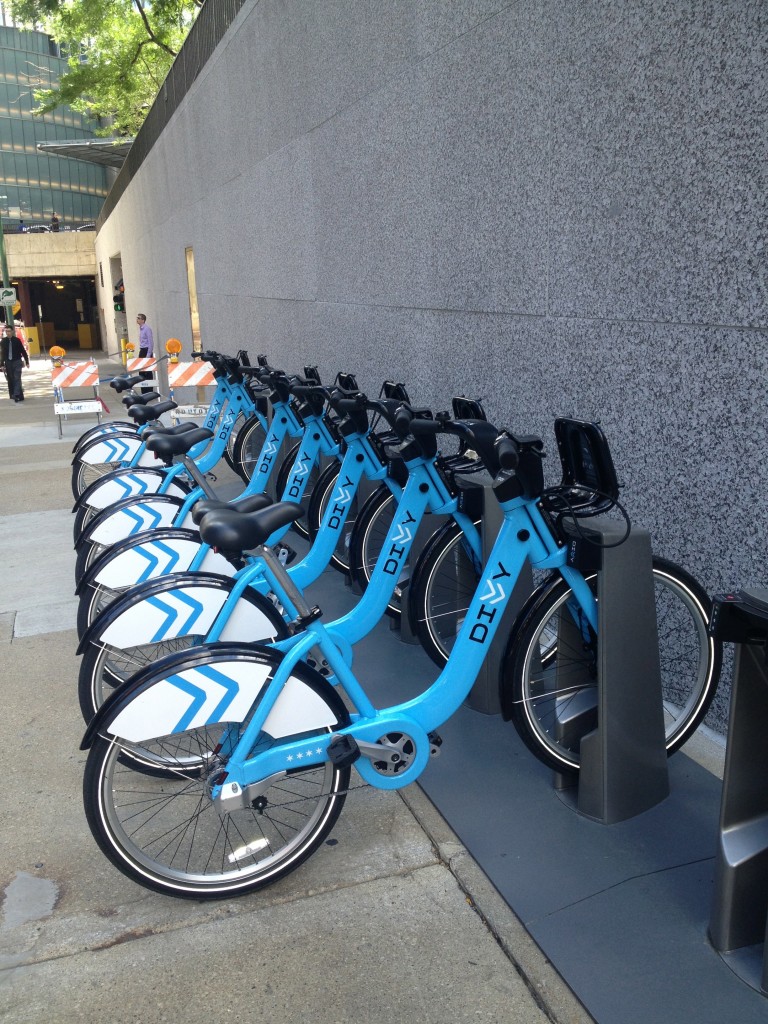 The bikes themselves were well branded and easy to see in traffic but the stations lacked any sort of easy-to-spot signage. We found ourselves dodging traffic to trying to cross intersections in search of stations. Around dusk, it was clear they also needed a bright blue light on top. (Although the bikes themselves had some nifty built-in lights.) 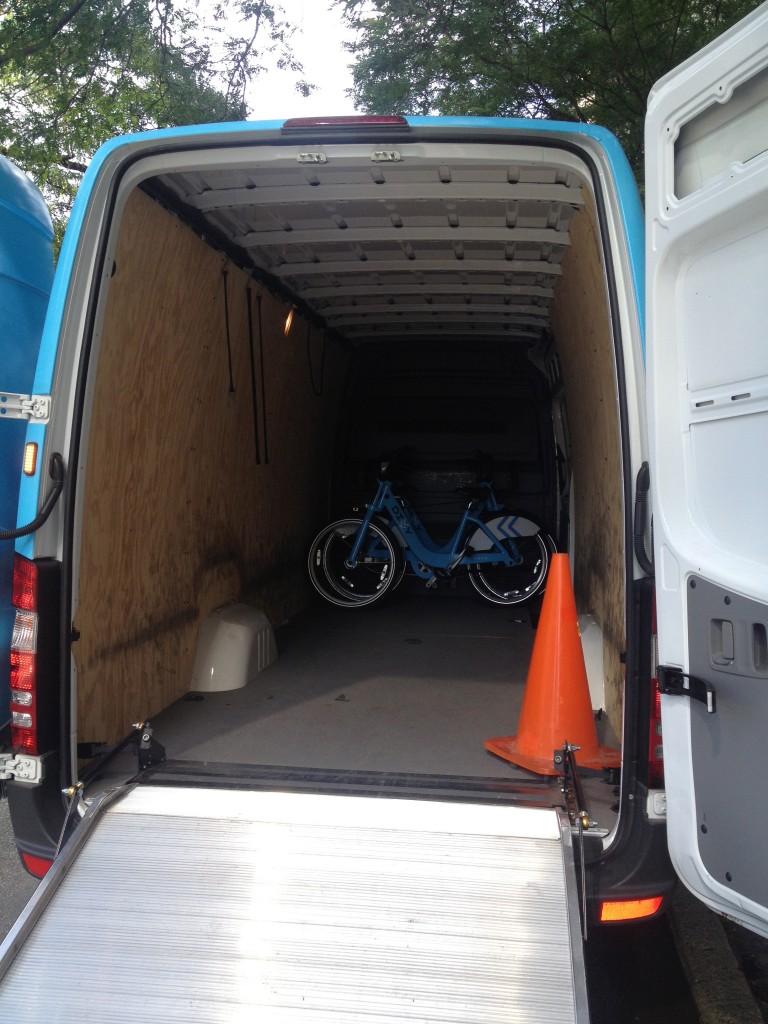 Crews were working hard to rebalance bikes but we did notice that a big special event—like a concert in Millennium Park—tended to thrown a wrench in the system. 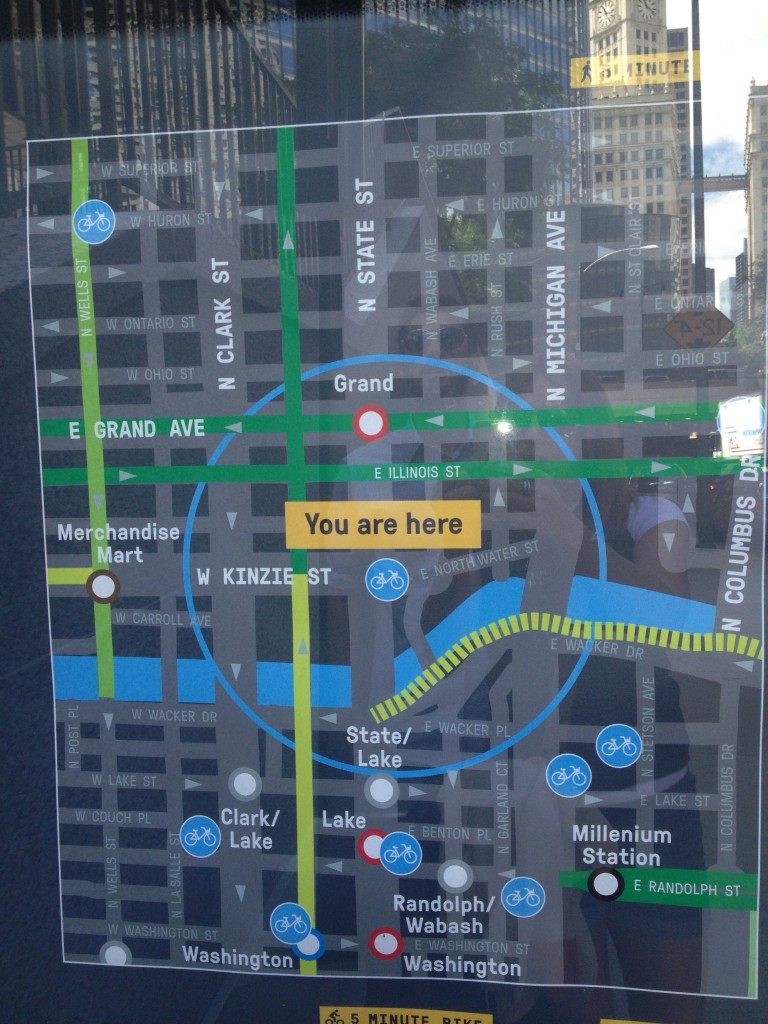 The maps were great and were very easy to read—as was the map on the app. I think the blue ring is the distance you can travel in 30 minutes. 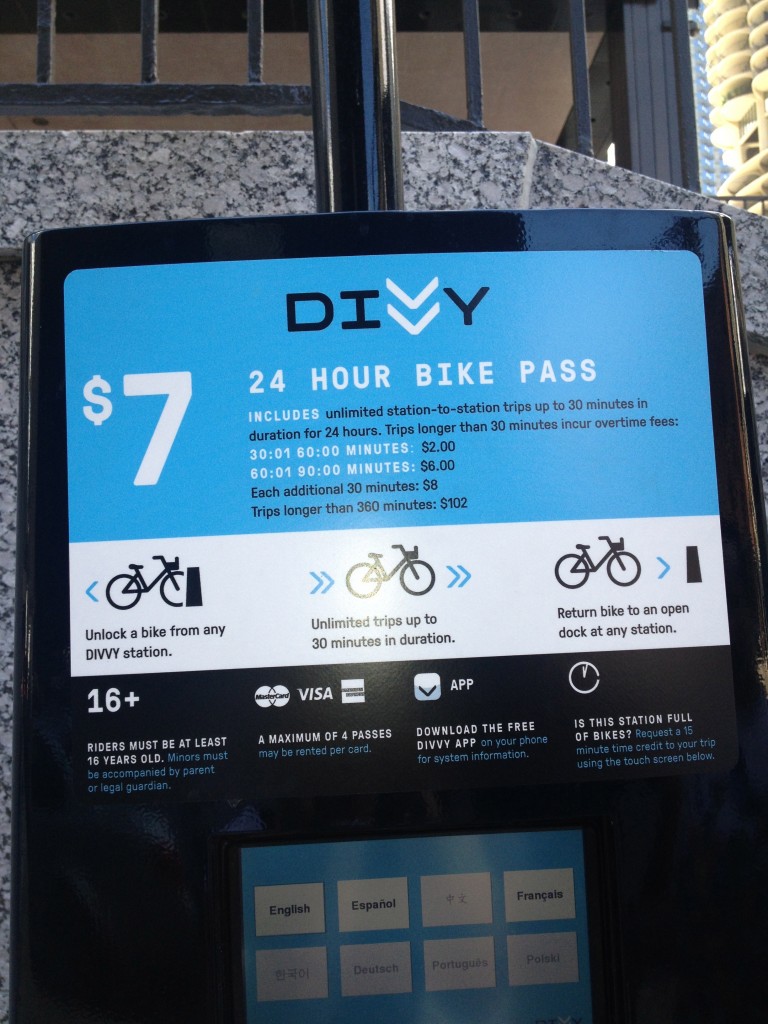 The 24 hour bike pass with 30 minute limits to your ride was a bit confusing at first but once we caught on, our main complaint was that 30 minutes wasn’t always enough time. We saw some tourists turn away from the bikes because they were looking for a day-long ride. We also spoke to some residents who found that 30 minutes wasn’t quite enough time to get to their destination. It’s really a good last-mile system and we made it work getting from the train station to the museums, but just barely. (We recently heard from a friend that Divvy added about 5 new stations in his neighborhood, making it the 30 minute deadline a bit more manageable).

Our main takeaway was that Chicago’s bike infrastructure simply wasn’t up to par. Downtown Chicago was far from bike-friendly—no bike lanes, no signage, and at one point we even found ourselves pedaling onto a highway (a kind cabbie waved us off). There was absolutely no comparison to the fantastic system we’re building here in Columbia.

Given how easy-to-use the rest of the transit system was, my thought is that most of the bike share demographic is siphoned off by CTA and Uber. That’s not a deal breaker—anyone comfortable with one type of mass transit will be more likely to adopt a new one. A few tweaks to the system and, most importantly, better bike infrastructure, and this program will certainly work.

← Make Your Own Street
There’s no there there. →