It always amazes me the number of cities who have major highways separating tourist attractions from downtown.

Downtown St. Louis, home of one of the most iconic images in our nation, has I-70 running between downtown and the Arch, which is built adjacent to the riverfront.  Pedestrians have to cross an overpass that is heavily trafficked by cars, unattractive, noisy and potentially dangerous.

The group City to River has a proposal to address this disconnect and beautify the area.  (You have to check out their website for before and after photos.)  However, this is a major task–what would this city be like if someone had said years ago, “Why in the world would we want to build a highway along our riverfront?” 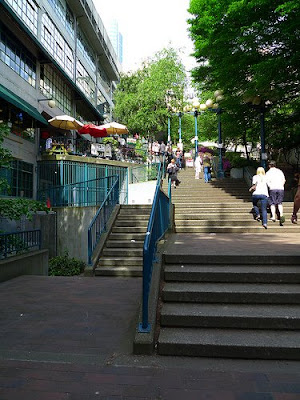 On a recent visit to Seattle, I had the dubious pleasure of walking along the Alaskan Way Viaduct. This highway (as well as a very steep hill) separates the waterfront from downtown and Pike’s Market.  Although the city and private landowners have worked to build pedestrian connections, they’re hard to find if you’re unfamiliar with the city.  I often walked blocks out of my way trying to find a way “in” to downtown.

Although the stairs are also somewhat daunting, dealing with a natural feature of the landscape is very different than trying to fix a poor design choice.

There’s a current effort by the People’s Waterfront Coalition to replace the highway with a boulevard similar to San Francisco’s Embarcadero and we wish them the best of luck.

← Where are people moving?
Economic Indicators →