Keep Away From Our Fancy Houses

When the state began a rails-to-trails program to transform the KATY railroad line into a bike trail, the City of Columbia had the foresight to transform their own spur line as well. Now, the MKT Trail connects directly into the KATY Trail, bringing cyclists from all over Missouri right into Columbia.

The MKT isn’t just for tourists–it’s become part playground, part transportation hub for so many Columbians. Whether it’s an afternoon walk with the family, a short cut for those biking to work, or a safe place for neighborhood kids to bike, the appeal of the MKT is unmistakable.

What it does depend on for its success is neighborhood access points. Formal or informal, public or private, these access points are how people discover the trail. Every time I’ve moved, one of my first objectives is to figure out how to get to the MKT from my new home.

There’s one access point that I’ve used on a regular basis for the last 10 years–a path about 15 yards long located in a neighborhood that backs right up to the trail. When I lived in this section of town, I used it almost daily.

Imagine my surprise then, when I noticed that a “No Trespassing” sign had been erected at the entrance to the trail. 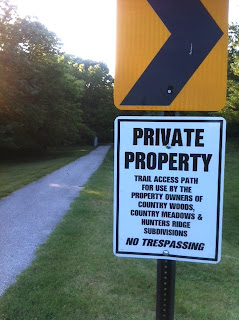 I don’t know the rationale behind this change but at some point, the surrounding residents must have decided that allowing public access to the trail from their neighborhood was somehow detrimental. In my experience though, this path was free of any sort of problems. No one was getting mugged. No unsavory characters were hanging out. There weren’t even many well-meaning families plopping down on people’s yards to rest. In fact, homes bordering trails have lower rates of burglary and vandalism than the national average.

One interesting factor here is that the half million dollars homes in this neighborhood were actually built after the MKT Trail was constructed. There was never any misunderstanding that they would be living adjacent to a city trail.

This appears to be part of a larger desire among some to keep the public away. We’ve seen it before in other cities–protesting against new transit stops, for instance–and it’s truly a method of closing down a neighborhood to outside interlopers. Transportation–be it a bus, a subway or a bike–is a great leveler. Not only does it allow people to travel into any section of a city, it also brings highly diverse people together.

This move shuts down a critical access point for the trail. It’s a safe way to enter the MKT from a local elementary school and from other nearby neighborhoods and it allows everyone to avoid biking down a busy thoroughfare to the next access point about a mile away. Besides, it’s such an unfriendly sign.

Imagine if the residents had instead decided instead to install a sign that said, “Welcome to our neighborhood. We hope you enjoy your time on the beautiful MKT Trail.”