Austin is adding nine new streets to their downtown, restoring the street grid and fixing what is called a “transportation dead zone.” According to the Austin American Statesman:

(Director of the Downtown Austin Alliance Charlie) Betts noted that adding streets reverses what has been a sporadic trend of the downtown grid losing pieces of streets over the past several decades, including Colorado Street in front of the Governor’s Mansion, East Ninth Street between Trinity Street and San Jacinto Boulevard at a federal office complex, and San Antonio Street at the Travis County Courthouse and just east of what will be the new federal courthouse.

“The expansion of the grid has high value to the community,” Betts said. “It gives some additional options for people to come into and exit from the central business district.”

We have a similar problem here in Columbia where the traditional downtown street grid has been slowly deconstructed, usually for development projects that seem worthy at the time. Or, put differently, for projects that make sense only within the confines of the property line.

This is especially true on the northern side of downtown. A rail line running into downtown effectively shuts off the northeast quadrant from the surrounding neighborhoods. A large-scale federal housing project shut down more streets to the north under the mistaken belief that the residential neighborhood would be better off without people passing through to reach the city’s central core. A later development project closed an entire city block to create a public square. The few streets that are still open dead end at a college. Now, people exiting downtown to the north must travel down a narrow, one-way road through a residential block. 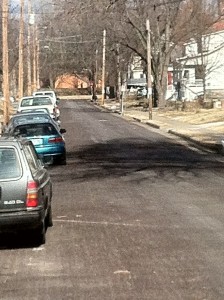 And this is not the only example. People exiting to the east–many of them students from the university–must also take a narrow, one-way road out, this time one that passes by a busy elementary school.

Even with this logistical nightmare, two other plans to close off streets connecting to the north side of downtown were proposed by government officials–one to create another public square and another to build a large parking garage. Thankfully, plans for the first were abandoned and city officials were persuaded to build a parking garage that spanned the street in the case of the second.

Unfortunately, it’s easier to identify problems with the street grid than to fix them. Austin is building the new streets through land occupied by a newly decommissioned power plant and water treatment facility, solving the sticky problem of land acquisition. Still, the construction itself will hit nearly $25 million.

That said, I’m still fairly convinced that restoring our street grid starts with major downtown institutions gaining a larger understanding of the fabric of downtown, and an understanding of how people actually travel into and across our central city. All too often, large institutions–government, university and even private property owners–create plans that end at the property line, failing to understand that a single piece of property is a merely link in a much larger chain.

2 Comments on “Restoring the Street Grid”