When the University of Missouri installed new street signs emblazoned with the school mascot, my first thought was how long it would be until these signs were decorating dorm rooms. Sure enough, signs began disappearing almost immediately. In Columbia alone, $35,000 of signs are stolen every year, largely due to poorly chosen names street names such as “Rolling Rock,” “Corona” and “High Street.”

Of course, here in downtown we don’t have what the city public works folks refer to as “beer streets” but the principle remains the same. How do you make improvements to the public realm in a way that prevents vandalism? Much of it has to do with eliminating temptations—securing outdoor tables and chairs, removing any possible projectiles from the sidewalk and placing street signs out of reach.

Makes you wonder what these folks in DC were thinking: 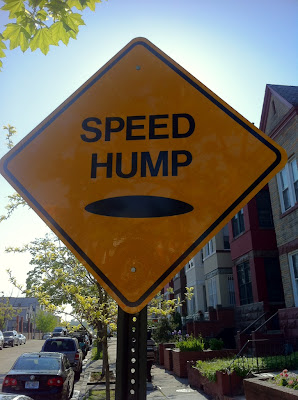 ← Is a road diet warranted?
The End of McMansions? →