This IS my neighborhood

We have a big firework show in our downtown every Fourth of July and the traffic jam after the show, as one may imagine, is significant. While we tend to walk or bike because we live so close, most people have to drive. Last night we arrived home and realized that a lot of people were turning down our street to avoid traffic jams on adjacent roads.

Now, I’m a big fan of the idea that public streets should be available to all members of the public. I have no problem with people driving down “my street” provided they drive slowly and watch out for pedestrians. However, late last night as we sat on our front porch, a line of cars began speeding down our street.

No problem, I thought. I simply started flagging down cars and asking them to drive a little bit slower. Most people were pretty cool about it, apologizing and dropping their speed down. Until the guy and his wife in the SUV.

“Hi, do you think you could slow down a bit as you drive through the neighborhood?”

“I’m not driving through a neighborhood.”

I was taken aback. What do you mean you’re not in a neighborhood? We have front porches and dogs and backyard barbecues on holidays. Of course we have a neighborhood.

“But this is my neighborhood.”

He rolled up his window and drove off.

I was furious but what became clear to me is that our street didn’t match his view of what constitutes a neighborhood. We have no winding roads or cul-de-sacs designed to discourage vehicular traffic. 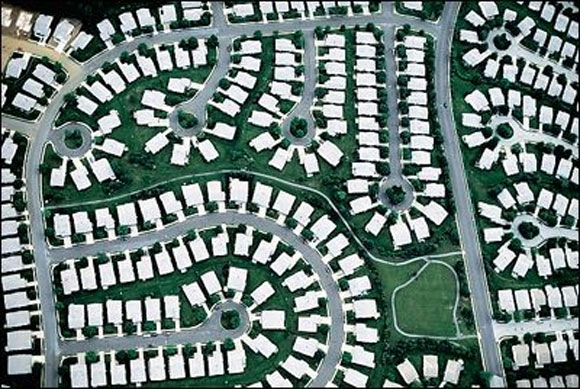 Instead, ours is a traditional street grid associated with urban centers and streetcar suburbs. These are highly walkable neighborhoods but also very easy to navigate in a car. In fact, the straight streets make speeding a snap (no doubt a reason why suburban neighborhoods were designed to deter and slow cars–and are popular with families with kids.)

Would I trade the traffic for a suburban-style development? Absolutely not.

Would I take a bag of our recycling and set it in the street to force people to slow down and navigate around it? Why, yes I would.

← City Shots
What Pokemon Go Can Tell Us About Our Cities →