At a recent conference in Winnipeg I had the pleasure of visiting The Forks, an area located at the junction of two large rivers. The Forks has served as a gathering place for thousands of years and it’s now an active community space with parks, museums, restaurants, and, despite months of sub-zero temperatures, lots of outdoor activity spaces. One Winnipeg artist, aware of how compelling the first glimpses of spring are to a snow-bound city, wants to install a cluster of crocuses blooming from the top of an unused smokestack. This public art project would add a touch of whimsy to the area and remind visitors that spring was on its way.

Smokestacks dot our landscape, and while some still serve a purpose, many have long since been abandoned. Most are also far too expensive to dismantle. Not surprisingly, artists are beginning to take notice of these vertical canvasses. Some envision colorful additions to the stacks like purple crocuses, flying pigs, or pink hearts. Others take a more traditional approach and paint them as they would a mural with scenes that reflect the history of the town. 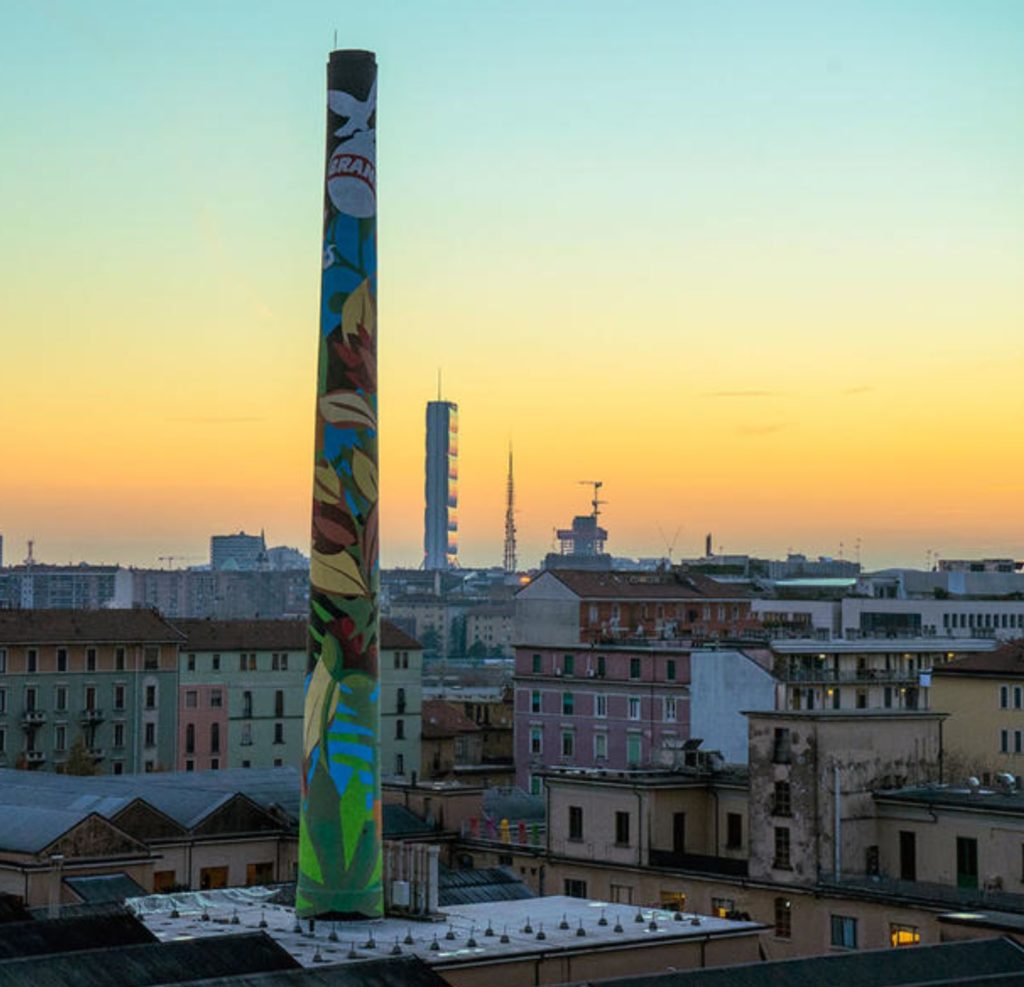 Perhaps the most stunning are the ones that play with light and projection. Spartanburg, South Carolina—a historic mill town—lit up not one but two old smokestacks as part of a city-wide celebration of lights. The City of Spartanburg was one of four communities nationwide awarded $1 million for temporary public art installations as part of the Bloomberg Philanthropies Public Art Challenge. The smokestacks were wrapped in reflective fabric and flood lights were programmed to project changing patterns of color onto them. 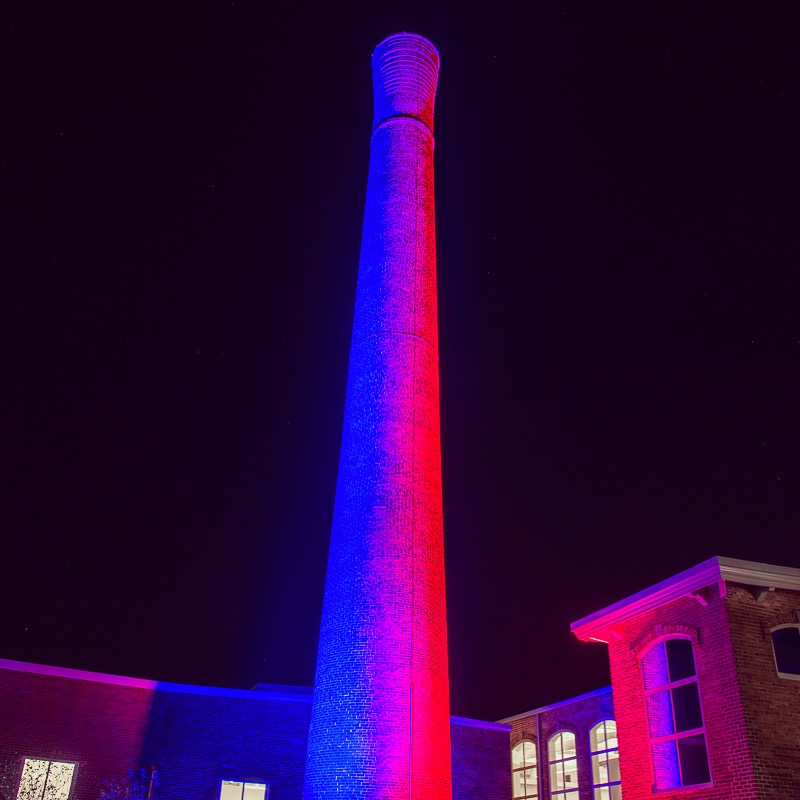 In New York City, a candle flickers on the side of a 50-foot brick smokestack on the banks of the East River. Funded by a local company, this permanent exhibit is a video projection visible every evening. And in Finland, the Turku Power Station displays a playful series of numbers in bright neon. The “Fibonacci Chimney” isn’t only a striking landmark — it invites people to stop and puzzle out its meaning. 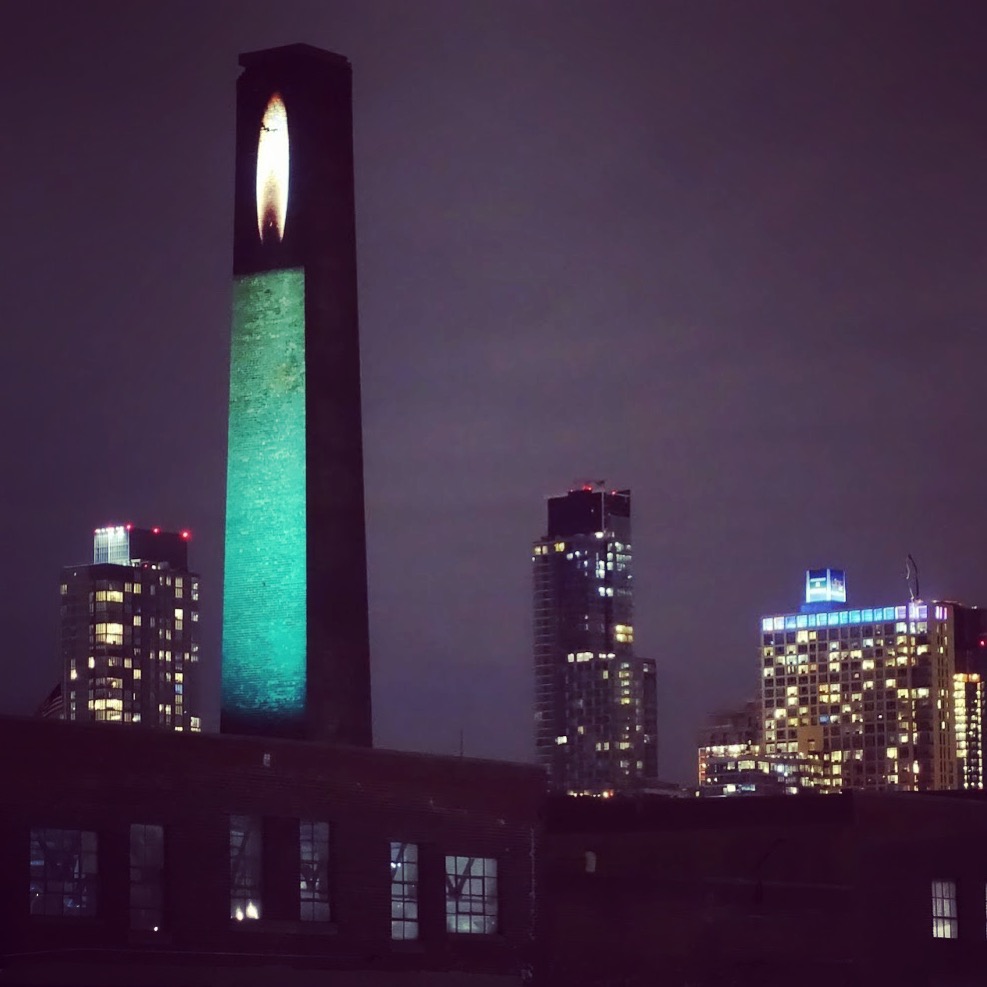 We have a smokestack on the Business Loop too, and these artists inspire us to see it not as an unused eyesore, but as an opportunity for creativity and artistry. When Water and Light wound festive lights around our smokestack this past holiday season, we realized its potential.

As part of our Loop Corridor Plan, we’re looking at ways to beautify the street, add public art, and create iconic landmarks. Instead of trying to create a landmark from scratch, why not simply embrace the most visible piece of architecture on the Business Loop? The smokestack at the city’s power plant has long served as a midtown landmark — maybe it’s time we all started exploring the artistic possibilities.