If you’ve ever remodeled your kitchen, you may have an inkling what it’s like to renovate an historic building. Rehabs often take longer than planned because you simply don’t know what you’re going to find once you remove the drywall.

But what if the thing you find is a historic hotel?

In Orange, California, just west of the Plaza, stands an unassuming stucco storefront with a sign announcing the offices of “Ex-Mormans for Jesus.” It’s definitely not a historic storefront. In fact, much of the block lacks the historic character of the others radiating out from the Circle. What makes this section of the block different, however, is that a 125-year-old hotel lies hidden, like a Russian nesting doll, within the more modern building.

Passersby don’t notice the hotel–I grew up in Orange and as many times as I walked through the Plaza, I certainly never did.  The folks at Haunted Orange, though, show that the rooftop is just visible from across the street.

Why has this hidden gem come to light now?  Wahoo’s Fish Tacos has purchased the space–and the hidden Vineland Hotel–and plans a full renovation. They’ll eventually use the building for corporate offices. 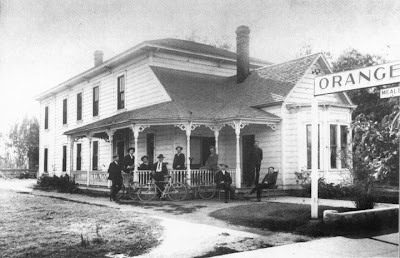 According to a report from their architect, Martin Eli Weil, the Vineland was originally built in 1886 as a private residence and was converted to a boarding house in 1888. It underwent numerous additions including, in 1917, the addition of the commercial storefronts in the original front lawn. (Okay, so it appears that these stucco storefronts have, at minimum, met the age requirements for a historic building. That said, it’s still not enough to save them from the wrecking ball.)
The new owners certainly have their work cut out for them (check out Haunted Orange’s website for some truly scary before photos.) No matter what they expect, those of us who’ve done remodels of our own know that there might be much more than a hotel hidden under all that siding and drywall. Regardless of what they may find, we wish them the best of luck with their project.