An interesting piece appeared in Better! Cities & Towns today, designed to get everyone thinking about how highly dense, mixed use developments common to downtowns help support the tax base: 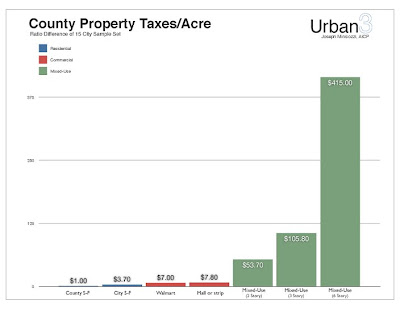 Minicozzi chose property taxes to compare because they are collected in both counties and cities and are more consistent across cities than school taxes. However, a vast majority of cities are also funded through sales taxes, making big box stores (and retailers in general) easy bets for cities looking to increase revenues. Unfortunately, these retailers are not the best for providing full time jobs with good salaries and benefits. It’s a constant struggle for cities. How do you increase city revenues while still attracting good jobs?

← Why do we insist on Bradford Pears?
When public transportation is a little too public. →