When public transportation is a little too public.

Josh Stephens of Next American City has another great example of the phenomenon in which a neighborhood protests against a project by throwing up myriad reasons why the project is simply unsuitable for their part of town.

The residents of Beverly Hills are fighting to prevent the construction of a Metro line through their neighborhood. This new line would connect Beverly Hills to, shall we say, some of the less affluent sections of the city.

The concern of the residents?

“That the subway’s planned passage through a tunnel under Beverly Hills High School will make the swank public school a destination for terrorists, or potentially, a tinderbox prone to deadly explosion.

In short, the city that inspired a million Tudor-style McMansions is blocking the transit authority’s plans with a demand that it reroute the subway extension to avoid running below the high school that inspired everyone’s favorite bit of 1990s high school television greatness.” 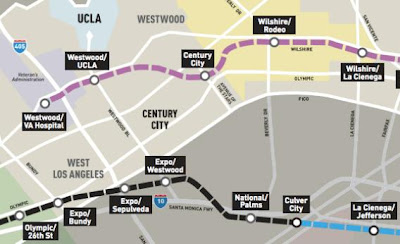 Although public meetings were held on this proposed extension beginning in 2006, residents of Beverly Hills didn’t become engaged in the issue until 2010. In addition to the concern that construction may uncover yet-to-be-discovered oil wells or methane pockets, opponents also raised the possibility that terrorists might want to make an example out of the public high school and, rather than simply driving a truck up to the front door, they would instead choose to take the subway there.

The students at Beverly Hills High, in contrast, seem unconcerned about these potential problems–a Facebook poll of students showed that they have very different perceptions on this issue than do their parents.

“I feel as though hysterics have been a factor here,” said a junior class president…”Subways run under all over metropolitan areas. They go under commercial buildings…they go under other public buildings….the likelihood of a fatal automobile crash is very real, despite the safety precautions and airbag regulations designed to protect us. However, we drive anyway. To fight the subway is to drive away modernization.”